Pre-Compliance Testing and It's Impact on Lifetime Profitability

Pre-compliance can have a huge effect on your product’s profit margins later down the line.

How can you maximise your profitability using pre-compliance testing? Keep reading.

EMC testing is intended to ensure that emissions from the equipment under test (EUT) don’t negatively impact on other electrical products in its vicinity. It also ensures that it is not affected, or is immune, to electrical disturbances caused by other electronics or machinery.

Whatever your market. Think EMC

Whatever market your products are in, if they contain electronics or have electrical components, like motors. It is very likely that some form of Electromagnetic Compatibility (EMC) testing is required for CE marking.

Generally, there are four areas of interest for EMC.

Two of these check the electromagnetic emissions made by the product over the air (radiated emissions) and its attached cables (conducted emissions).

The other two make a corresponding evaluation of the immunity of the product to sources of interference from other electronic devices or phenomena. Which, are also either over the air (radiated immunity) or via connected cables (conducted immunity).

EMC testing requires a relatively large and expensive specialist test chamber.  The smallest of these are known as 3-metre chambers. Typically they have internal dimensions of around 9m x 6m x 6m and are designed to perform radiated measurements at a 3-meter distance. For larger EUTs, there are 5 and 10-meter chambers also.

The test chambers often feature a turntable in the centre to allow the EUT to be rotated for ease of measurement.  In addition to the chamber there is a wide range of test and measurement equipment, cabling and antennas. Much of which needs to be kept calibrated.  This all adds up to an initial significant capital spend and an ongoing cost overhead. This makes EMC test chamber hire an expensive proposition. The typical cost per day is between £1000-£1500 including a test engineer.  Depending upon the required testing full compliance can take a number of weeks to complete. The cost can, therefore, add up to multiple thousand pounds with no guarantee of a pass being achieved.

It’s easy to focus on the aesthetics and functionality of a product during the development and ignore, or avoid compliance completely.

EMC chambers are expensive so it’s tempting for you to only undertake EMC testing when a project reaches completion. But Wait!

This is a big risk.

If you get your product all the way through to completion and fail EMC consider this. You’ll need to undergo a major redesign right at the end of the development which will likely result in a significant project overspend and time slippage. Not to mention any component issues you might face.

Pre-compliance testing and its superpower

Pre-compliance testing provides the ability to perform a quicker set of sets, at a correspondingly lower cost.  This means your products are much more likely to be EMC compliant, to be assessed much earlier on in the prototyping phase.  Issues can then be addressed to reduce the likelihood of nasty surprises when product development is complete.

You can identify the cause of emission peaks, this is possible, in an R&D lab, using near field antennas. You can then make changes to address them.

You can then make further visits for pre-compliance to confirm the issue has been resolved. This then shows that the product is likely to get through formal testing without surprise issues occurring. 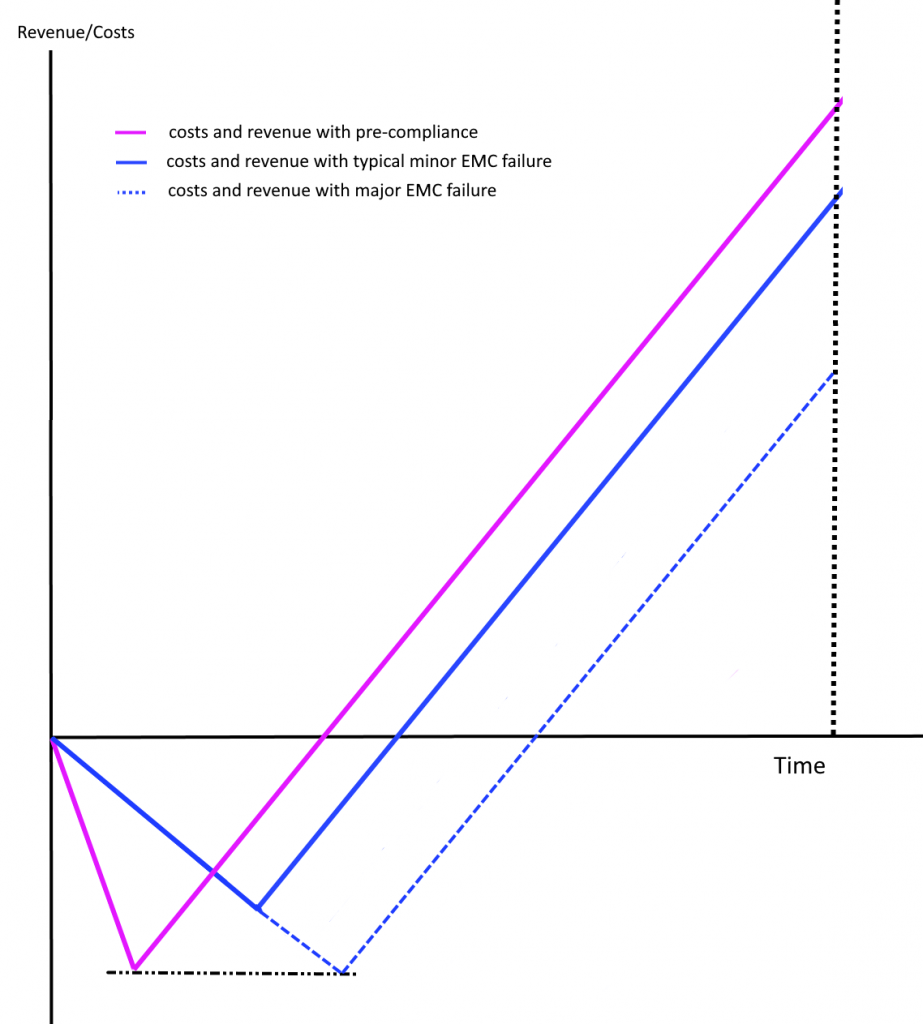 Don’t forget the economic impact that pre-compliance testing can make.  The above-simplified graph shows the product profitability for three scenarios.   All of the lines show the development costs increasing until the point of sale. This is where revenue comes in and the product then becomes profitable.

For ease of comparison, the rate of revenue generated for each of the three development approaches has been kept the same. In reality, product delays can allow competitors to steal a march and take market share. This will reduce total revenues even further.

It is very interesting to note the area under the line at the dotted line point in time.  Even though the pre-compliance approach has cost more money than the typical approach, this approach typically gets the product to market sooner. It can then generate more total revenue in its lifetime. The time lag, for a minor rework later on in the product, reduces the product revenue because it gets to market later.  The line where a major compliance issue was discovered late on shows a marked reduction in revenue.  If the product’s lifecycle ended at the dotted line this product would barely have broken even!

Product issues left undiscovered until late on in their development cycle can cost significantly more than the costs of pre-compliance.  I cannot think of an occasion where some level of pre-compliance testing was unnecessary Of course, it is necessary to find the balance.

The upfront costs of compliance testing may appear to be avoidable.  These, however, allow change to be made early on in the design, if required. The earlier the change is made, the lower the overall cost and the greater probability that the product is a success.

If you have any questions, don’t hesitate to get in touch. We’d be happy to have a chat.

How Have We Helped